RapidRoad is our answer to the high demand for USB products for classic Amiga computers. RapidRoad is a dual-port USB2.0 High-speed (480MBit) host module. It comes with a license for the most versatile and compatible USB stack that exists for the Amiga: Poseidon by Chris Hodges. With it's dual-interface design, it can be used with almost all types of Amiga computers. Requirements are:

This version of RapidRoad comes with all required cables and transparent insulation, all pre-assembled for use on a clockport of almost any Amiga or a clockport of a Zorro card. The USB ports are on a low-profile metal bracket on a space-saving dual USB port, which can be separated from the metal bracket for installation in a place of your choice. The low-profile metal bracket will most likely not be interesting for any Amiga user, but the choice of this space-saving double USB port will be interesting for those users who want to install the USB ports in place of one of the D-Sub connectors of the Amiga.

RapidRoad will not take power from the clockport. Instead, power is taken from the floppy power connector of your Amiga, and the floppy drive can be connected to the pass-through connector of RapidRoad. This will provide enough power for the two USB ports that the clockport would not be able to provide.

RapidRoad will not perform very fast on the clockport, but it will perform reliably. We've done extensive tests on multiple implementations of the "clockport" and implemented numerous fixes for possible timing glitches that many clockports of ageing Amiga computers are showing. Further, we've done everything to help you install the clockport cable the right way: Connector and cable have a polarity notch, and there's a circuit in place that keeps damage to a minimum in case you're connecting the other side of the cable the wrong way round. A white LED will show proper connection roughly one second after the computer has been switched on.

Should you decide to upgrade to an X-Surf-100 at a later time, this version will also work on that card and it'll perform just as fast as the X-Surf-100 version. The transparent insulation can be removed and re-installed without damage, so you're free to move this card between an X-Surf-100-equipped Amiga and a clockport-Amiga.

For operation of RapidRoad in an A600, we recommend the A604(n) expansion. 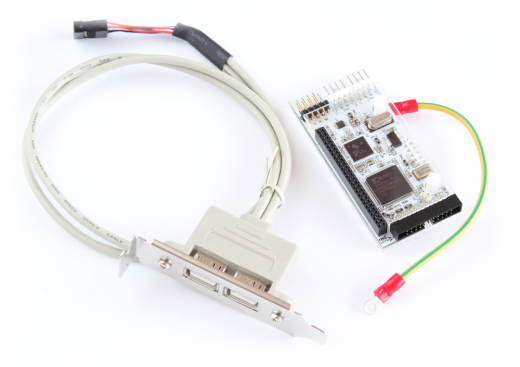