This accelerator comes with a 68020 processor (16,67MHz rating) and 64MB physical memory. 9MBytes of this physical memory can be used by default, and the CPU speed can be switched between 9,46MHz and 17,03MHz. Compared to memory expansions that are available for the A1200, the ACA1221 comes with more memory, more acceleration and more expansion features at a lower price.

ChipMem access speed has been greatly improved in comparison to the ACA1220, which will help eliminating the so-called "Turrican slowdowns" and other WHDload game hickups. Although the card is running asynchronously to the A1200, synchronous ChipMem speed can be achieved while maintaining full PCMCIA compatibility.

The ACA1221 introduces a new approach regarding upgrades: You can buy licence codes to activate additional memory, overclock the CPU or enable the MapROM function. Upgrades can be tried for free: Up to ten trial runs of unlimited time can be made, so overclocking stability can be verified before purchasing the licence code. Two possible overclocking frequencies can be purchased any time after the card has been shipped: 21,28MHz and 28,38MHz.

The ACA1221 has much faster memory performance than most older designs with a 68020 processor. The modern 3.3V SD-Ram is clocked at over 85MHz, resulting in 0-waitstate access most of the times. 9MBytes of memory are usable out of the box, and upgrades can be purchased for 17MBytes, 33MBytes or 63MBytes total fastmem.

As with the previous ACA12xx accelerators from Individual Computers, the ACA1221 can be equipped with the popular 1MB Maprom option at very low extra cost. Maprom allows you to increase ROM access speed by copying the Kickstart ROM into an especially-reserved memory space. This will improve real life performance considerably, but it will also enable you to load any higher version or patched version of a Kickstart ROM.

Another huge improvement over older accelerators is memory mapping to the legacy 0x00c0.0000 address. This is the location where many A500 games expect a trapdoor memory expansion. The ACA1221 card gives a good compatibility boost only because of this little chunk of memory in the right place.

The ACA1221 is not only expandable by licenses, but also with physical expansions: The clock port is mainly meant for an RTC module, but it can also be used to connect any clockport device that has been designed for the A1200. It's a straight copy of the A1200 internal clockport: Very early A1200 board versions do not have a usable clockport, so this port will come in handy for owners of such a board. More details about possibilities and limitations of this port can be found in the technical Wiki from Individual Computers.

The second clockport is specifically designed for the RapidRoad USB host controller: It is considerably faster than a normal A1200 clock port, which will result in considerably higher USB transfer rates. For the first time, you will be able to install USB in an A1200 without opening the computer! This port can also be used with a Subway USB controller. Both physical expansion ports can only be used with an A1200 or the forthcoming ACA500plus. Clockports cannot be used on the ACA500.

You will need in addition to that:

Processors on this card are used and may have scratches. 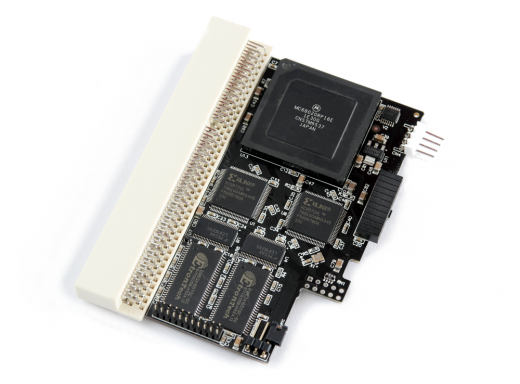